Peaceful Lion Productions was founded in 2006 by Ollie Fielding to produce stylish productions with a hint of mischief, a dab of spectacle and a sprinkling of the fantastic for audiences of all ages.

Our brand new production of Orion and the Dark based on the book by Emma Yarlett will be touring the UK throughout 2016.

At the end of 2015 we produced the world première of Nutcracker! The Musical, a fresh new look at the original ETA Hoffman fairytale with a modern musical score heavily influenced by Tchaikovsky's famous ballet. Rosie's Magic Horse based on a book that could only have come from the vivid imagination of Russell Hoban and illustrated by Quentin Blake toured throughout 2015 after opening at the Southwark Playhouse in December 2014.

As part of our work we run a Theatre for Hospitals initiative where we take performances of theatre into hospitals to perform for children who have limited access to the arts. Our specially conceived production Rhyming Capers is designed to provide children in hospital and their families with a transformative experience, enabling them to experience a high-quality arts performance, where an emphasis upon the imaginative art of narrative and storytelling, can re-invent a clinical space.

In 2012 Hayley Fielding joined Peaceful Lion as an associate producer and Amy Holson-Schwartz joined the team in 2013.

Our desire to create inspiring and inventive productions is matched by our commitment to producing quality theatre. We are dedicated to producing theatre that pushes the boundaries of creativity and quality, and to ensuring that theatre is accessible to all. 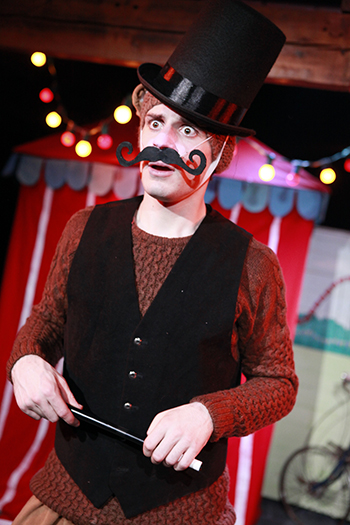