He’s written operas, sonatas and symphonies. Now he brings his epic piano skillz to the cabaret circuit. Ludwig Live has played at the Leicester Square Theatre as well as the Brighton and Edinburgh Fringes

Ludwig van Beethoven has written operas, sonatas, and symphonies. What's next for the immortal genius? Why, a swinging cabaret act, of course! Join Beethoven as he sings about his angry mistresses, his rivalry with arch nemesis Mozart, and his senile mentor Haydn. With his trusty stage manager Kathy by his side, Beethoven bemoans Beiber, sighs about Cyrus, and tells you the one thing wrong with One Direction. Roll over, Beethoven? Not tonight!

"A tour de force from actors Bryan Hodgson as Ludwig and Anita Creed as Miss Everything Else from Wagnerian soprano to a very Modern Major General... Imaginative, clever and very funny"
The Argus

"An hour of fun, silliness coupled with beautiful music and a history lesson" *****
London Theatre 1 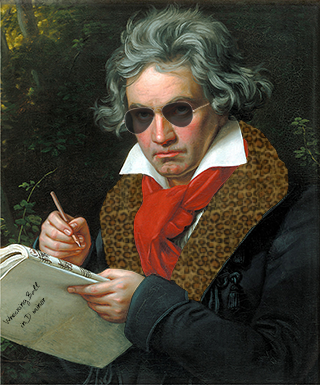